Hospitality complex in the Pažaislis monastery

In the southern part of the complex GDL Grand Chancellor Christopher Sigismund Pacas apartments are founded. It was the founder of the monastery, which housed the Camaldolese monks from Italy. The apartments have a living room and a bedroom, as well as a bathroom. The bedroom is for two guests, there is a bed with a canopy that conveys the spirit of the Baroque era.

In the northern part of the complex Pažaislis founder Christopher Sigismund Pacas wife Clara Isabel Pacas (Countess Clara Isabel de Maijly) apartments are founded. She was relative of the Queen of Poland and came to the Grand Duchy from French manor, bringing with her a unique sophistication and charm. Clara Isabel apartment is set to aged baroque grace and refinement. Guests of the apartments will be able to enjoy a separate bedroom and living room and bathroom.

“Monte Pacis” hospitality complex is equipped with four suites and for each of them are given royal names.

The complex located in the northern part has suites named after the Swedish King Charles XII and Napoleon Bonaparte, while the southern part houses the Polish – Lithuanian republic King John Sobieski and the Emperor Nicholas I suites.

All suites are in registered form for two guests. During installation of these rooms, we tried to retain the spirit of the Baroque, combining it with modern facilities. For your convenience rooms are also equipped with a minibar, free Wi-Fi, a four-poster bed, a toilet and shower, hair dryer and air conditioning system. 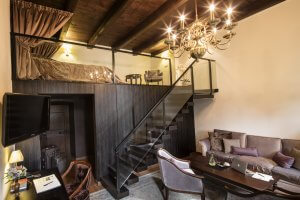 The second floor of the complex is equipped with seven standard rooms, which are named after historical pilgrims and guests:

The rooms are equipped to convey the monastery and ascetic pilgrimage spirit.

Hotel reception is open around the clock.